Get a FREE Guide To Getting Started With Passenger Arrival Lists

The first ships to dock on American shores did not carry lists of the passengers on board. Such lists came much later. Prior to 1820, only the port of Philadelphia mandated passenger arrival lists and only for non-British Commonwealth passengers. Beginning in 1727, Philadelphia registered foreign arrivals, i.e., from outside the British Empire, a practice that continued until the Revolutionary War.

Some very early lists of passengers survive for the period 1620 to 1640 (see guide, Hotten, under “Suggested Resources”) as they were created by authorities at the port of embarkation. If a passenger was an indentured servant or a convict, English port authorities may have a surviving list (see guide, Coldham, under “Suggested Resources”). But overall, extremely few lists survive before 1820.

Beginning in 1820, the master of a ship arriving at a U.S. port from a foreign country was required to file a list of passenger names with the local customs office. When passengers purchased a ticket in the country of origin, their names, ages, occupations, and country were written down by shipping company agents. The shipping agents passed their list to the ship’s master and the list was transcribed onto the arrival port’s form. 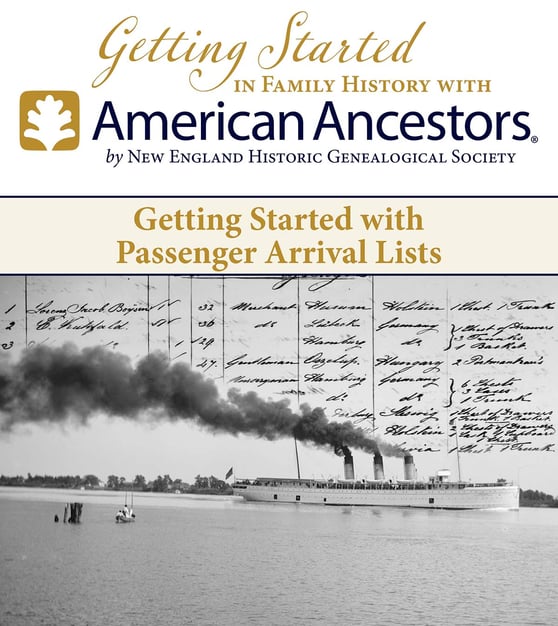 American Ancestors/New England Historic Genealogical Society (NEHGS) is America’s founding genealogical organization and the most respected name in family history. Established in 1845, We are the nation’s leading comprehensive resource for family history research and the largest Society of its kind in the world. We provide expert family history services through our staff, original scholarship, data-rich website, educational opportunities, and research center to help family historians of all levels explore their past and understand their families’ unique place in history.

We are a member-based nonprofit corporation dedicated to advancing the study of family history in America and beyond, by educating, inspiring, and connecting people through our scholarship, collections, and expertise.